Overview:
A 1 hour skirmish game using Space Crusade components. Any miniatures and 12x12 squared boards could be used. You will need a Space Crusade rulebook and cards, the cards could be handwritten copies of Space Crusade cards on index cards, you would need about 6 per player.
The self-destruct aboard the ship has been activated, you have 12 turns to kill the traitorous Space Marines and teleport to safety
Setup:
Take 1 board per player and push them together. there will be a 2-square corridor between boards, but add an extra door to each board junction. Place a coin on each board in 1 corner, the coins should be as far apart as possible. Place a Space marine or Chaos 5-man squad as close to each coin as possible on separate squares. The coin is a teleporter for the adjacent marine squad, no other squad can use it. Any Marine entering the teleporter square is removed from play for the rest of the games, but is a survivor.
Objective:
The games requires 12 turns. You get 1 point for every enemy you kill, and 1 point for every marine who teleports off the ship. You lose a point for each of your Marines on the board on turn 12 (the ship explodes). The player with the most points at the end of turn 12 wins.
Play:
The marine squads fight each other as per the rulebook, except that the commander has 2 life points instead of six. You can have either 1 or 2 heavy weapons. Chaos has only one heavy weapon marine miniature.
Cards:
Each player randomly selects 1 of their Equipment cards and 2 of their Order cards. A Chaos player will select from any 1 player's unused cards. The cards are hidden from the other players until used. So you reveal a Targeter card the first time you fire the weapon in question. As usual, equipment cards last the whole game, Order cards for 1 turn.
Strategy:
You need to kill as many of the other player's troops as you can (they are in the thrall of Chaos), and teleport off the ship before turn 12 ends. The heavy weapons are more effective, but they spend most of their time advancing and then running to the teleporter.
The cards will determine the player's strategy, a "fire twice" card used wisely could win the game.
So you advance, position your troops and play your order card. Two turns later you will have lost or won the engagement, and a well planned retreat will be needed.
Campaign:
The winner gets an extra equipment card in the next game, cumulative between games. The player who wins the 4th game wins the campaign.
Aliens:
Create an 8 Orc squad, each player bids the number of Gretchins they want, lowest bid takes the greenskin side, no cards. Gray team 1 Dreadnought, bid for number of Androids. There are alternate Marine Squads such as Pauli_SC_new_squads_v1.zip in the BGG file area. Pauli_SC_new_squads_v1 creates new chapters and cards out of a single text file, this would work well with the Space Crusade Lite system, you can easily have Angry Marines, Mr. Bean marines or whatever. 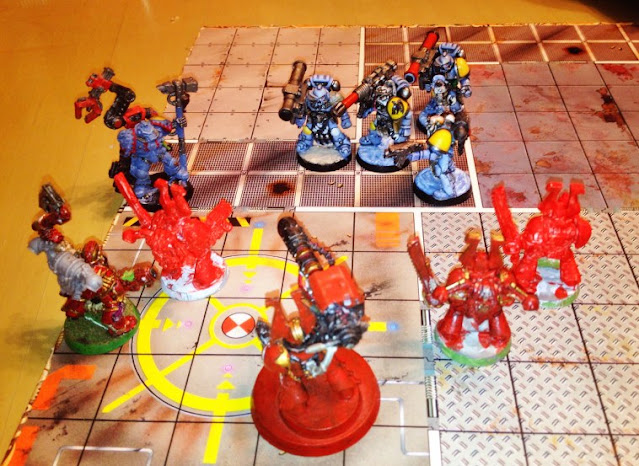