Want to play a game, Buddy?

Here is a Terrance & Philip word game to play:

Repeat until Hesitation, Deviation or Repetition occurs. The last word must be previously unused, loosely equivalent to "Buddy" or "Guy", and delivered quickly.

Co-op version: Set a timer for 2 minutes and see if you can keep it up.

The Canary in the Mineshaft Logical Fallacy.

John Scott Haldane was a Scottish Physiologist (who doesn't love Physiologists) who used to lock himself in a sealed chamber and document the effect of various gasses on humans. He invented a respirator for soldiers in 1915, the oxygen tent, the decompression chamber for divers and found that canaries would die more quickly that humans if Carbon Monoxide was present. Once wonders how may animals he got through before getting to canaries.

So the living Canary in the Mineshaft is a sign that all is well, we are happy to see the happy canary in the mine. But we do not believe that the canary is responsible for the lack of CO in the environment, merely a symptom thereof.

Some people are used as an indicator of the fact that something has happened, but others actually assume that the person is responsible for the change, when they are merely a product of it. If a group is allowed more freedom, we note that some members of that group come to the public eye. Often, people assume that they caused the change, when like the canary, they are a symptom of it.

In Ireland (or at least in the South) it was said that folk would have a picture of the Pope on the mantelpiece beside a photo of John F. Kennedy*, the first US President with an Irish Catholic heritage. Some people seemed to talk as though Kennedy was personally responsible for much of the change, rather than a sign of the gradual acceptance of the Irish into mainstream US society. This fallacy makes heroes (who doesn't love heroes) out of canaries. The canaries may be heroes for other reasons of course, as with JFK.

Giving the individual canary all the credit also simplifies history. We can blame Neville Chamberlain for failing to prepare the UK for war, when very few wanted to prepare the country for war. Politicians generally come up with polices that will make them popular with the majority of the people, rarely did they single-handedly make those polices popular.

So the logical fallacy is that if the canary is an indicator of the effect, it is not necessarily the cause:


The Logitech 3D Extreme Pro has an extremely stiff spring for the roll and pitch. If you cut the top 360° and bend the top a bit to flatten out the contact at the top, this makes using the joystick less tiring.

See video below for disassembly instructions. You can remove the 4 brass screws without disassembling the stick part, with the screwdriver at a slight angle. It isn't very difficult to disassemble and reassemble. After reassembly the bottom of the stick had a bit of play, so I took it apart again and wrapped a rubber band around the base of the innards to remove this play.

The difference isn't dramatic, it seems to reduce the effort required to about a half. The stick re-centers itself as before and there is no rattle. Cutting off 1 full coil would therefore be conservative, you could go further.

The easiest option is to unscrew the 8 screws on the bottom, unscrew the 4 brass screws at an angle, remove the spring, reassemble and use 4 rubber bands to externally center the stick. This looks bad, but gives you a super low effort stick. If you need more tension, just double up the rubber.

Also, 3d printing a throttle on a cable seems like a good idea, although they want $50 for the .stl file. 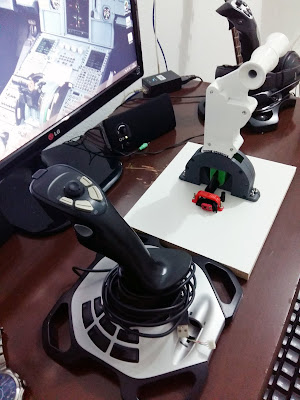 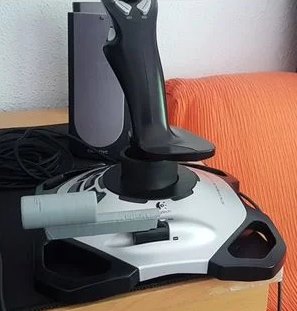