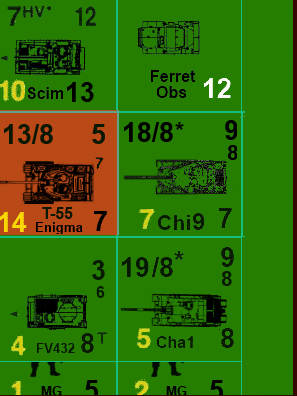 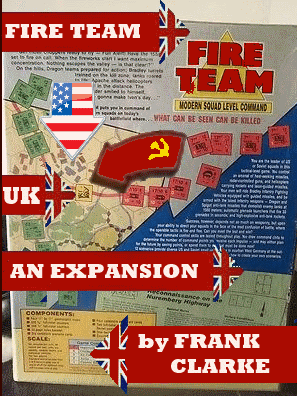 Situation:
Fire Team is a boardgame where the US and the USSR fight in 1987 at an individual tank/squad level.

Shortfalls and warstoppers:
The all-important British are missing. So are the Northern Irish.

Assumptions:
You have the original game. I paid US $18 dollars on eBay, plus + $15 shipping. Cheap.

Comment:
So here is the UK expansion for Fire Team. There is a new counter set, and some 21st century rules for Reactive Armour (Old style and Kontact-5), Top Attack Missiles and  Tandem warheads. But in the land of Fire Team, it is 1987 ("Walk like an Egyptian") most of the time.

In 1987 the British just aren't like the Russians or the Americans.

In 1987 Thatcher's British are the victors of the Falklands, the Soviets are 2 years away from the destruction of the Berlin wall, while the Iran-Contra Affair US is all wishy-washy. The British are stuck with ungunned APCs and old equipment, while the USA and Soviets have Attack Helicopters and Mechanized Infantry Combat vehicles.

So the UK fire teams will have to make up for material weakness with "Bags of bull, bags of confidence".  In game terms the Soviets get a -1 Morale cut against the UK. British leaders can rally adjacent units at no extra cost, which saves them some command points. Therefore they can formulate and execute cunning plans to foil the designs of the Soviet hordes.  Imagine poorly dressed Germans in Squad Leader.

The UK is low budget, except for their MBTs, the Soviets have better equipment. Most British Infantry will be TA reservists, a dedicated bunch of rough, tough, jolly fellows who use what little they have with enthusiasm.

Enemy situation and capabilities:
The T-72 was introduced in the mid seventies, and panic ensued. Missiles such as TOW and MILAN were introduced, the M1 Abrams / Challenger / Leopard 2 were developed. By the early '80s NATO had caught up, and the USSR was too poor to up the stakes. Although T-72 was the main Warsaw Pact MBT, T-55, T-62 and T-64 would still have been needed for invading Western Europe.
For a '70s feel you can replace M3 with M113, M1 with M60a3, and use Chieftan and FV432 in place of Challenger and Warrior. The USSR gets BTR and T-55/T-62/T-72. 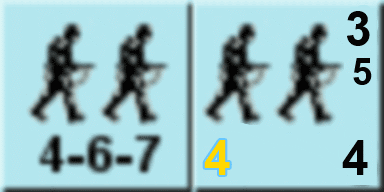 Actually you could keep the numbers, 4 for firepower, 6 for range. You would have to add a "designation" platoon number, or a color code. Movement distance would be 4, or 3 for "Inexperienced Infantry". You would ignore the morale number.