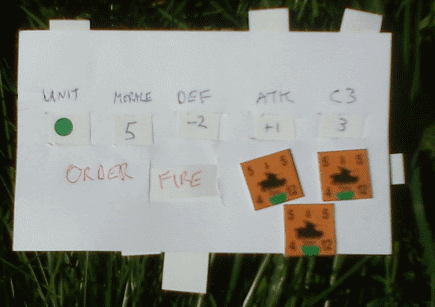 Company card for tactical hex wargames. Three "platoon" counters with green stickers  form "Green Company".
Your average units don't need cards, they just act as per the rulebook. Specially good or bad units get a card to modify their capabilities.

Rationale:
Modern hex wargames often have extra rules to allow historically successful units to run rings around their opponents. The addition of sticker-coded formations, such as "Green Company" above can bring new life to an old game, without adding written rules.

Capability slider:
Unit: Color coded or numeric. (Write a number or letter on the sticker if you run out of colors)
Morale: Panzerblitz/Panzer Leader, remove "D" result on a D6 roll of 5 or less.
Def: Modifier for defense value on counter
Atk: Modifier for attack value on counter (better ammo, or you don't like the number on the counter)
C3: If the counters are 2 or less hexes apart, they get some kind of bonus, such as Split Move and Fire. C3 means Command Control and Communications.
Order: (Move, Overwatch, Fire, Fire&Move (1 or 2 counters move, the rest may only fire, or Split Movement for all, if allowed). Set the order for turn 2 at the end of turn 1. This may be hidden from the other player, as in MBT, leading to interesting bluffing. Overwatch gives you Opportunity fire out to maximum range in Panzer Leader.

You could have sliders for:
Close Assault/Overrun die modifier

Other things:
You can place homemade counters on the card, "Low on Ammo", "Shocked", "Ragin' Fury", whatever you like. Rather than placing markers on the counters.

Graphics:
You could have paper fastener (brad) dials, with WWII radio look graphics to them, if you want to go overboard. Some ideas:

There are old hex map and counter tactical wargames where each army is just a bag full of counters, with no organization.
Modern games have Command. Control, Communications (C3), Morale and training. And activation systems instead of turns.
But with some colored stickers and index cards this can be fixed.
Here we have Situation No. 8 from "Panzer Leader", click to enlarge. 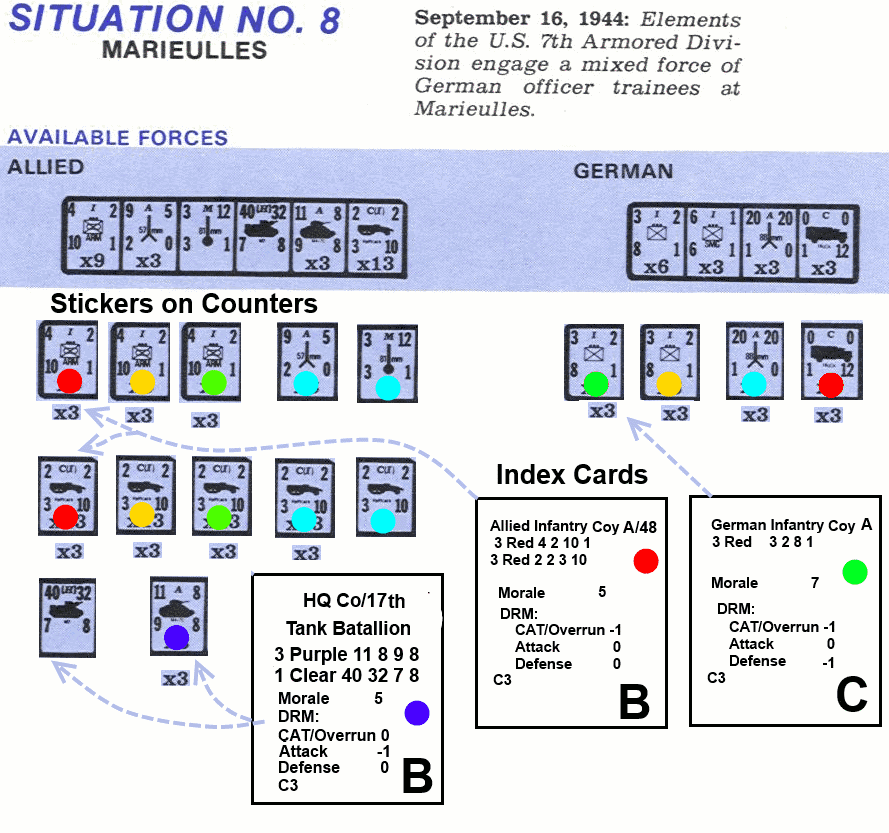 Go through the game counters and color coded counters with small stickers into groups of 3 to form "Companies".

We take any Panzer Leader/Panzerblitz/Whatever scenario, and add paper 3x5 cards to represent companies with pencilled-in stats, specific to the scenario (See above diagram).
If you have a dozen Allied counters, pencil in 4 cards, maybe 5 minute's work.

We take all our counters and group them into stacks of 3 identical counter types. Each stack gets a sticker of a different color on each counter. You can cut a big sticker into smaller ones. If you only have a few colors, write a letter or number on the sticker to distinguish companies. 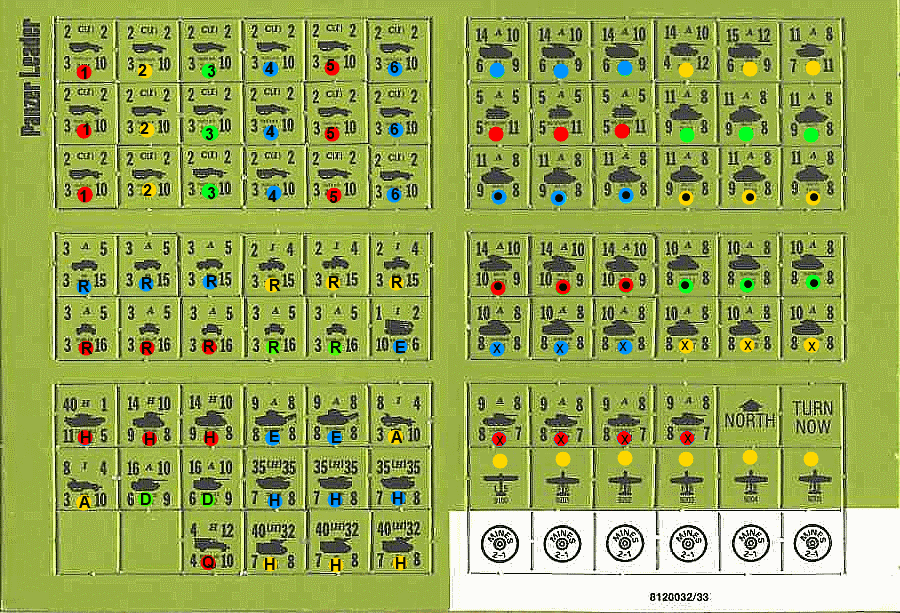 The counters are "Platoons", 3 "Platoons" with the same color sticker form a "Company".
3 or more "Companies" form a "Battalion". If you just have one of a specific counter, you can add it to a Company card as "Clear" (no sticker), and call it a "Det" (Detachment).
Each Company has an paper index card with its color and stats noted.
Each Battalion has an paper index card with a list of the Companies it activates.

Here we have divided the Americans up into an Infantry Battalion and a Tank Battalion.
Not all of the Tank Battalion is present, just the HQ Company.
The Germans are an Ad Hoc group, just some people thrown together. 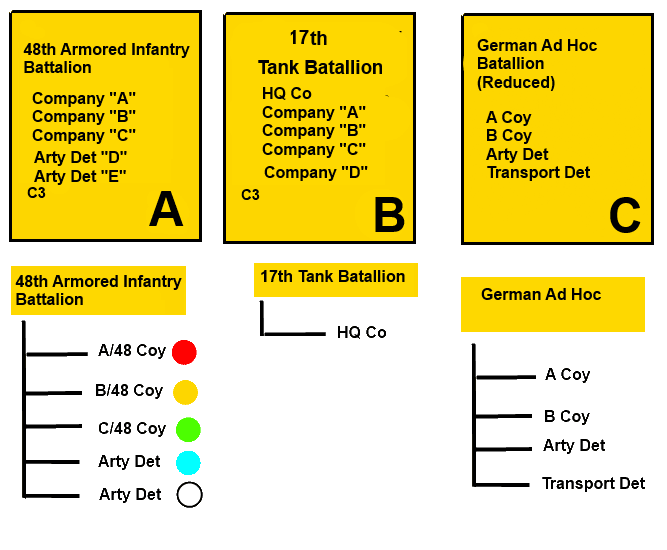 Repeat until all the cards are played and all units have done something. If some units don't have cards or stickers, each player gets a card with a C3 letter "X", otherwise blank. That card has the lowest C3 rating, and activates all units that don't have stickers.

Air units have Company cards representing squadrons. They cannot be activated by a Battalion.
Offboard artillery is organised into Companies too.

You can have a paper "chit" for each company, with the colored sticker on it, the sticker may have a letter or number on it, as in the the counter set picture above. The chits go into a cup, and are drawn blindly. The company chit drawn has its companies activated immediately, the chit goes into the discard pile. To simulate superior Command / Control / Communications, the Soviet player  has to roll a D6 when they draw a chit, a 6 meaning the chit is discarded without activating the company. When the cup is empty, the turn is over, put the chits back in the cup and repeat.

Each Company has its own Statistics. The company will have its own Die Roll Modifier (DRM) values to represent training, and motivation to use that training. A British Para Company will have a negative modifier for CAT/Overrun, since they love to assualt things. Attack represents skill with Direct or Indirect fire. Defense represents the ability to avoid fire, scouts might have a negative modifier here.

Application in the Scenario

In the Scenario at the top, the German Officer Trainees are die hard fanatic hero types, with high morale (7). They just got off the trucks, and they are in training, so they have a low C3 value. They will put up an enthusiastic defense, and get a Close Assault and Defense bonus. The veteran 88mm gun crews have -1 to attack and defense, but low morale, since they have seen too much, and believe the war to be lost.
The Americans Infantry have fairly low morale, not because they are cowards, but they prefer to avoid losses by letting Armour and Artillery do most of the work. No Banzai charges.
Keep the cards for the next time you play the scenario. You can research a historical Company, and write their special abilities on the card. Unit History on the back of the card, perhaps.

The cards add color to the scenario, each Company has its own personality, as in real life.
Low morale units will collapse as soon as they come under fire, elite tanks with -1 CAT/Overrun will ride roughshod over such troops.
The Activation system allows the well organized Battalion to cleverly outmaneuver their hapless opponents. The player with low C3 will end up reacting to their opponents cunning plan.
In stereotypical Eastern Front (Panzerblitz) scenarios, the high morale/C3/training SS Panzer Abteilung/Kampfgruppe taking on a much larger conscript Soviet force, the Soviets falling into disarray quickly.

Print these to play the scenario (Click to enlarge): 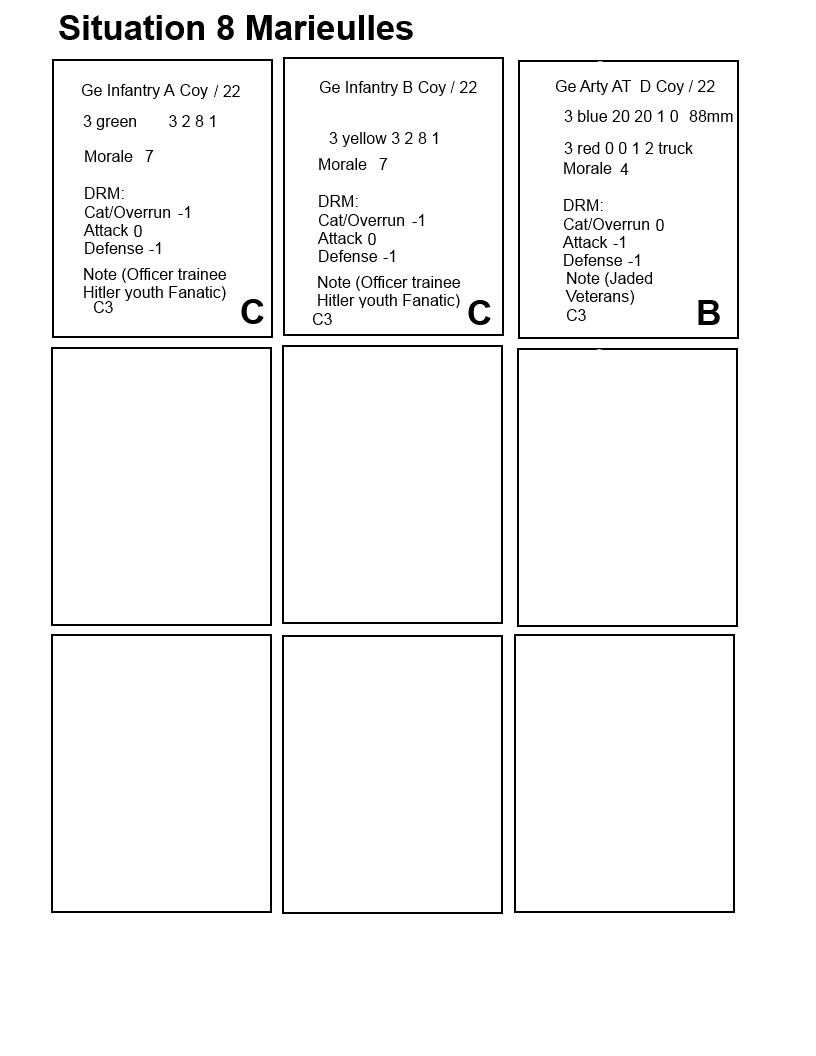 This is a spreadsheet that displays SeeelPanthers MBT data in the Avalon Hil MBT / IDF card format. 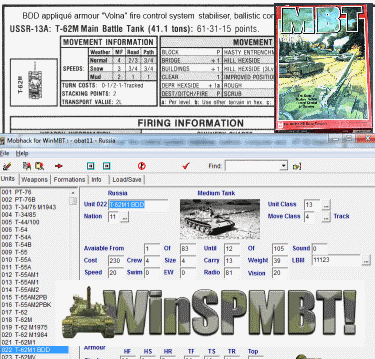 The spreadsheet takes the data from the computer game (Mobhack .csv dump), translates it into the Avalon Hill format and displays a card that you can print and use in the board game.
The computer game data isn't 100% compatible with the board game system, and the formatting is rough, but you get about a 1000 new units for the boardgame.
If a field looks wrong, type in a different number and print your corrected version.
There is a Middle East spreadsheet, I can do Europe and Asia if people are interested.

There will probably be the odd discrepancy here and there, some units will be gobbldeygook.

The computer game is good:

These are imported from Steel Panthers MBT Mobhack, and viewed in ingenious spreadsheet-o-vision. The table is in MBT (1989) TARGET INFORMATION/ARMOR CHARTS format.
The armor thicknesses are difficult to check up on, but it should be fine for wargaming purposes.
Reactive armor not included, I would add 20 vs HEAT for Kontact-1, 25 vs HEAT for Kontact-5, and 40 vs APDS for Kontact-5. Kontact-1 +5 vs APDS, it must do something.
Reactive armor covers only about 60% of the front of the tank.
The Penetration values are presumably 0m, "444" is a code value for "missile".
There are duplicates for later versions, engineering variants, command models and so on.

Instead of MBT cards, you could really have a FIRING INFORMATION table with all the Soviet gun data on it, and a TARGET INFORMATION table like the one below, with about 20 vehicles on it. So 2 bits of cardboard instead of a fistful of matrices.
The useless TT and HD are combined. There is no Level/Rise/Fall, a 25 foot elevation is a degree at 4 hexes, not worth worrying about. But add or subtract 15% for elevation if you want to pretend.
The failure of MBT to grasp simple geometry is mind-boggling.