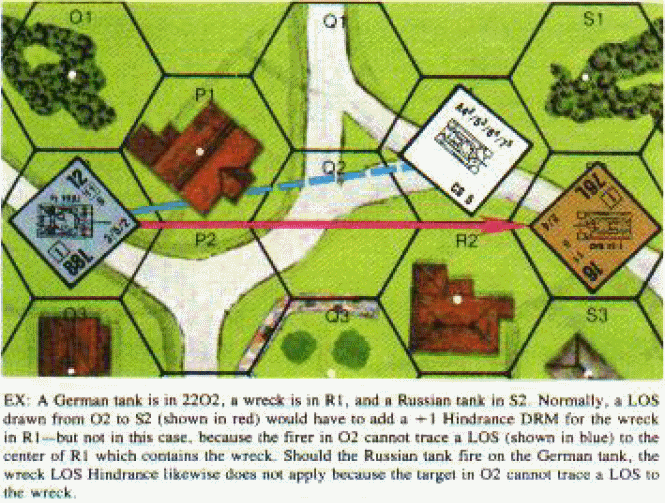 
11. New Gun/Missile Fire Table
(Note: In Fire Team, if you can fire HV or HT, HV is almost always better, so HT isn't much use. In reality, HEAT rounds have the same penetration at all ranges, that why you carry them)
For HT Gun fire at the rightmost column the gun can fire at (for T-62, 18-20), shift 1 column left.

For HT Gun fire outside 13 hexes, shift 1 column left. (There was a Cold War tradition of the Soviets relying on firing a lot of HT at long range)


Use the HV column on the Gun/Missile table for HT, and the HT column for HV. SAM is unaffected. 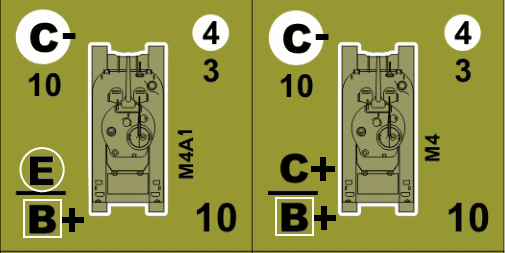 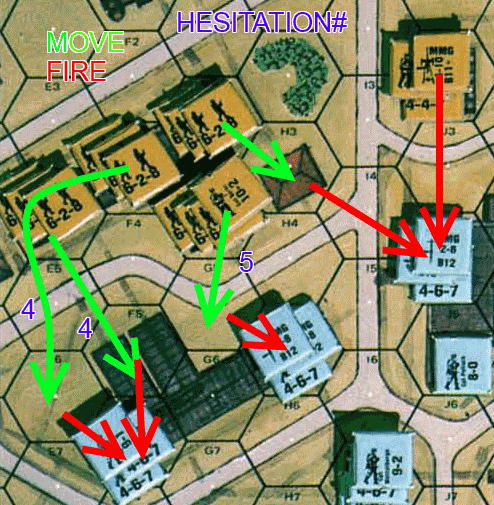 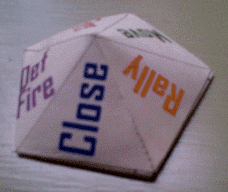 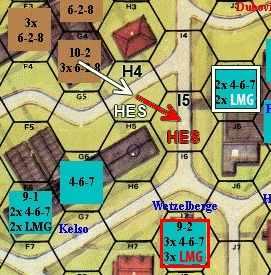 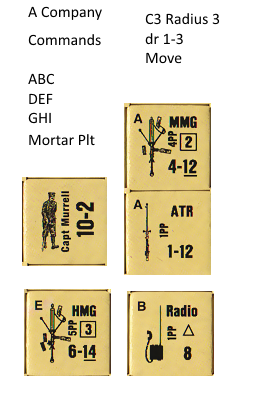 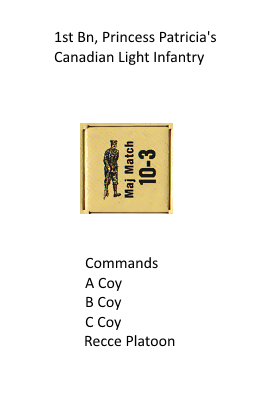 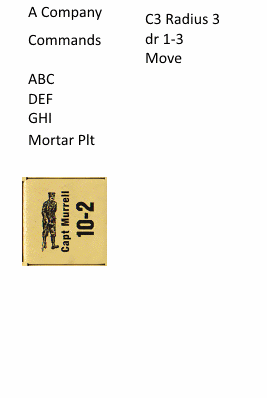 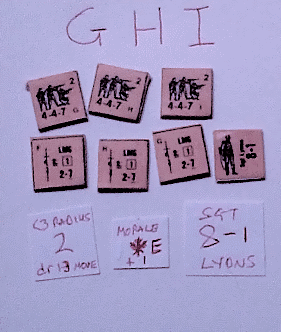 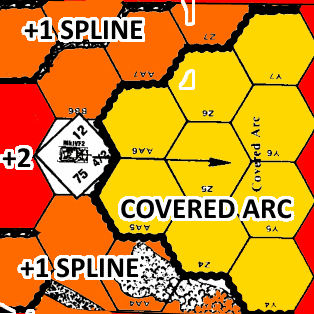 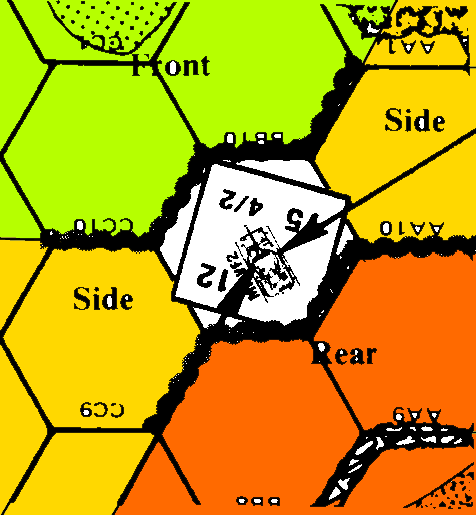 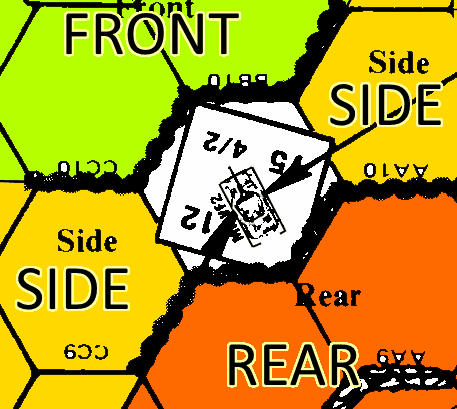 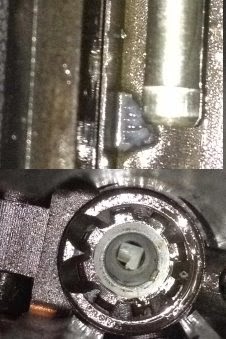 Vehicle vs Infantry: XI. ARMOR COMBAT (3)  and XII. ORDNANCE - VEHICULAR TARGETS
Calculate Main Gun fire like a machine gun, not the Retro "infantry have armor defence of zero".
There is Normal Range, Double range (+2 DRM), and Half Range (-1 DRM).
The tank has a Normal Range equal to double its caliber in cm, round up. Or 8 hexes, whichever is greater*.
Use the IFT column less than or equal to the caliber in cm.
All  autocannon (Marder, Wirbelwind, Bradley, BMP-2) are IFT column 8 normal range  12

6) Reaction Fire (Vehicle): Defensive fire range is doubled for vehicle vs vehicle, but has a 3-column right shift penalty. (Vehicle Reaction Fire was deleted from the 4th Edition). Comment: If both vehicles can easily kill each other there is a Mexican standoff, since a 9 or less kills the first guy to move at close range. 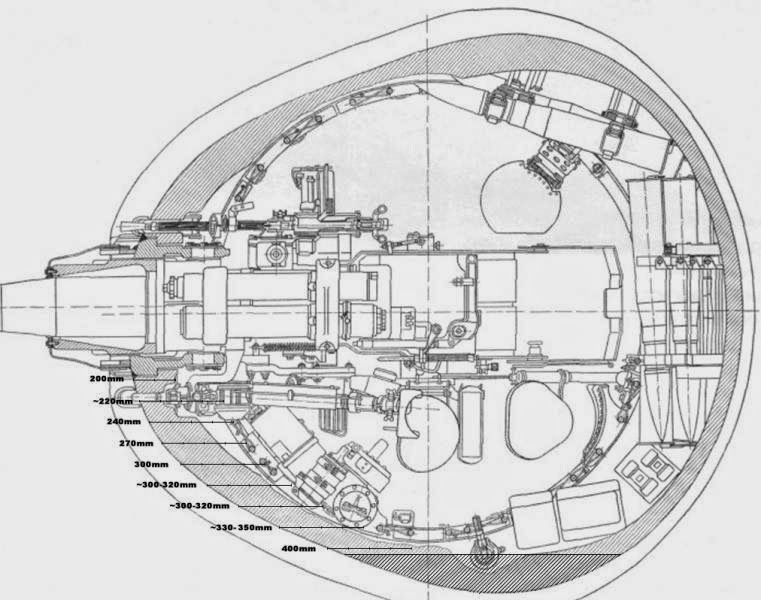 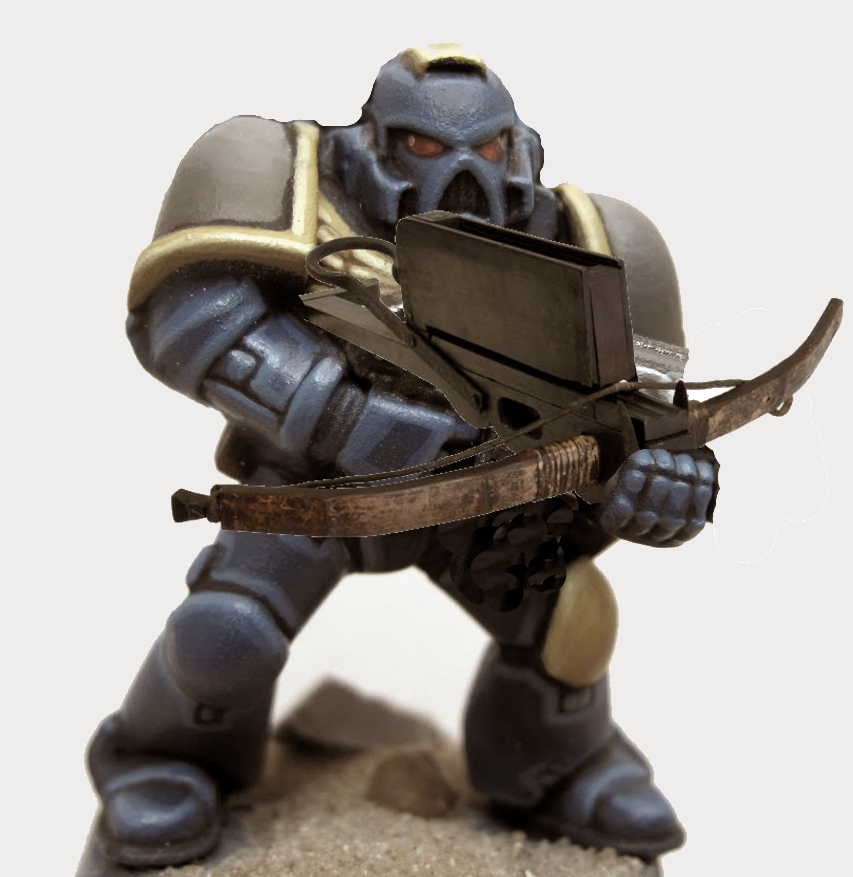 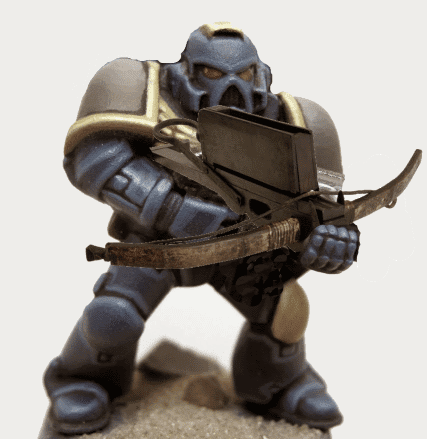 HeroQuest Heroes have Mind Points which cannot be used. Wizards have high mind points, Barbarians have low mind points. Chaos Warriors, Fimir and Gargoyles beat the Barbarian on mind points. Ancane research has discovered that Mind Points allow Heroes to stay sane when in contact with the Chaos Warp, the very Warp that animates the undead. Wizards, Seers, Necromancers and Priests are trained to negotiate this psychic dimension, simple warriors are not.
Optional rule (not for the first Quest):
This rule changes gameplay significantly. The Wizard is now the most important team member.
The Wizard can wipe out Undead (0 Mind points) easily, or even survive a Chaos Warrior for a turn if they have their Mind points on maximum. The Barbarian will need the Wizard's spells when fighting Chaos Warriors and Gargoyles.
Careful planning will be required before opening a door.
If you have a Wandering Monster rule that forces the Heroes to keep moving, the player will have one player resting and the other 3 fighting much of the time.
Newer characters such as the Necromancer and Seer will become important when this rule is in effect.


=================================================
HeroQuest Heroes have Mind Points which cannot be used. Chaos Warriors, Fimir and Gargoyles beat the Barbarian on mind points, but the Wizard beats them all.
Arcane research has discovered that Mind Points allow Heroes to stay sane when in contact with the Chaos Warp, the very Warp that animates the Undead and fuels what humans call "Magic". Wizards, Seers, Necromancers and Priests are secretly trained to negotiate this psychic dimension, simple warriors are not.


Comment: This is handy for ganging up on the final boss. Barbarians are likely to lose Mental Fight, but they only have to kill one goblin to get the Mind point back.

"I will not cease from Mental Fight, Nor shall my Sword sleep in my hand" - Blake

For each level increase you get a choice of 1 extra Attack die or 1 extra Defend die and either an extra Body point, or an extra Mind point. In HeroQuest, the Heroes become too powerful, since the acquire new equipment, but the monsters don't. So: 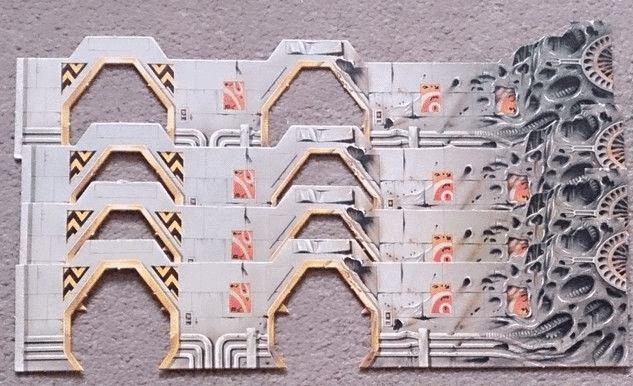 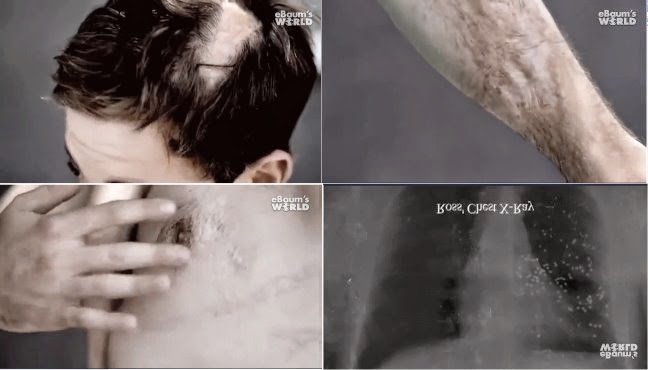 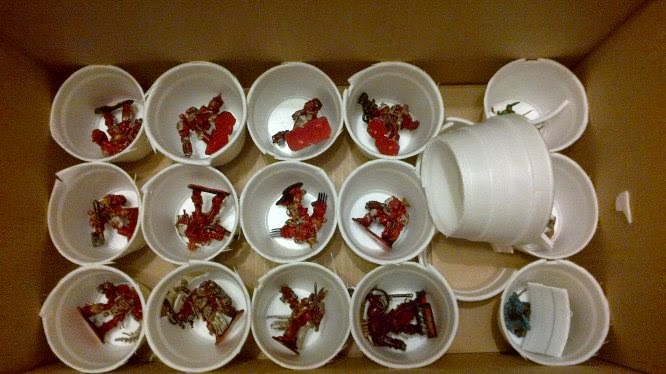 When a blip is revealed, the newly placed Aliens will have a strategy determined by a dice roll:

When a blip is revealed, the newly placed Aliens will have a strategy determined flipping a coin:
Heads: Rush Headlong at the enemy.
Tails: Keep moving towards the nearest Enemy miniature, but stop just short of visual contact.
Leave the coin on the board, near the miniatures, for reference.
Make a note of the strategy of each revealed group of blips, maybe use a D6 on the board beside the miniatures.

Change of Alien Plan:
When you draw an event card that has a picture of a Greenskin, turn over any coins that are on the board. If you go from heads to tails, the Aliens retreat around the nearest corner, firing as they go.
So you may be just about to charge the enemy, when they charge you first. 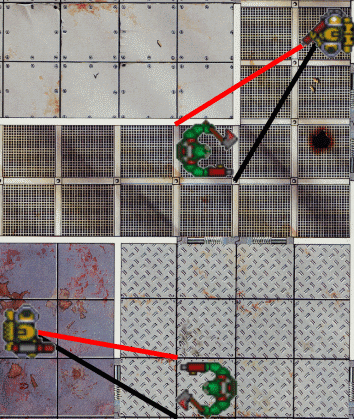 Both Marines can see at least 1 corner of their Ork target, but not all 4. So if they shoot and kill the Ork, roll a white die. On a 1 or a 2, the Ork is saved by the cover.

Comment: The Marine can see some of the Ork, but not all, so the Ork will be harder to hit, logically.
This rule reduces the "A-Team" nature of Space Crusade, where everybody just lines up and shoots each other. Now you can win the firefight by careful placement of your troops.

Action tokens allow you to move and/or fire during the Enemy turn.
At the start of every turn each Marine player gets 1 "Action Token". The Alien player gets 1 Action Token for every Marine player each turn. Action Tokens can be spent on the following Actions:
On Lookout and On Overwatch, you may always fire and/or move before the Enemy fires.
A miniature can't be On Lookout and On Overwatch at the same time, but 2 different Ultramarines could on Lookout/Overwatch in the same turn.

A player may not hide her tokens, this is not a memory test. 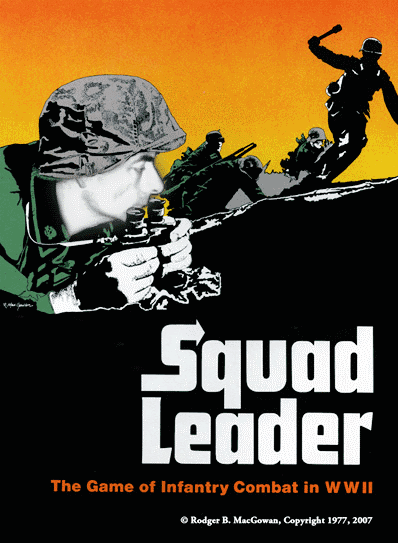 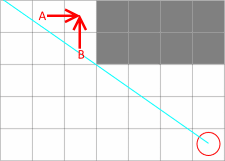 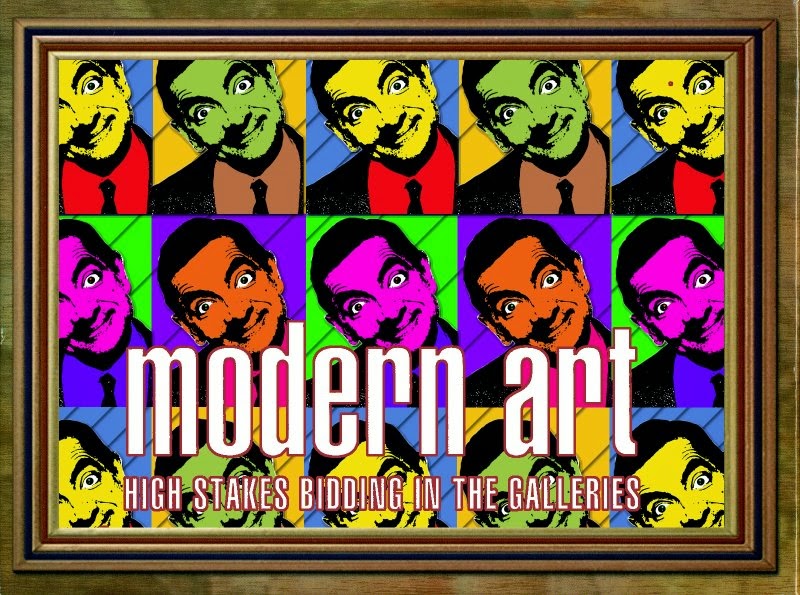 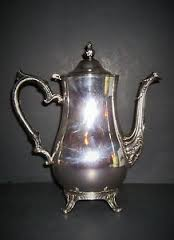 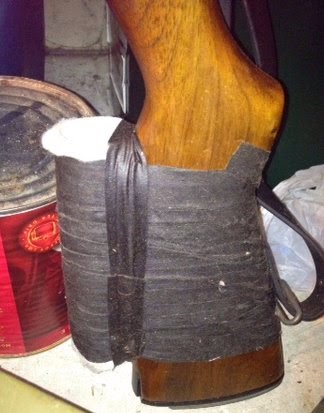 A stunned AFV loses its next player turn, it cannot fire, move or pivot.
If the AFV fails the ELR check, the crew abandon the vehicle. Place a crew counter under the vehicle counter. The crew must immediately rout. The crew may self-rally in the Rally phase, their morale is their ELR - 1. The abandoned vehicle is a "Kill", turned over as a wreck.

Optional: The abandoned vehicle is not a "Kill", the counter is not turned over. The enemy may attack the empty vehicle again to try to Kill it and turn the counter over. If the crew begins the rally phase in the same hex as their vehicle, and the vehicle is not a wreck, it is back in play with the original leader.

Comment: Armor combat is very quick in Retro. The Partial kill houserule adds a bit of extra excitement, with the possibility of rescuing a damaged AFV. The HE vs AFV rule use the same Partial Kill system.

If the Armor Combat Table die roll is equal to or just 1 higher than needed for a Kill, roll a D6:


A stunned AFV loses its next player turn, it cannot fire, move or pivot.
If the AFV fails the ELR check, the crew abandon the vehicle. Place a crew counter under the vehicle counter. The crew must immediately rout. The crew may self-rally in the Rally phase, their morale is their ELR - 1. The abandoned vehicle is a "Kill", turned over as a wreck. 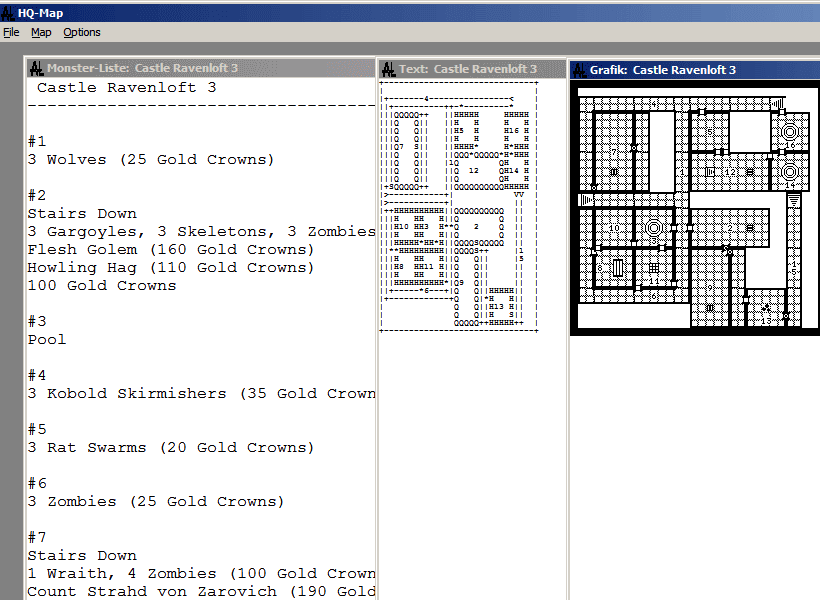