Now you can have full power to forward shields without much complexity. In addition, missiles can reload themselves every other turn for free. There are extended range torpedoes for torpedo boats, and cheaper photon torpedoes, so you can have most of your ships armed with torpedoes, just like in the real world. The original torpedoes were expensive, and needed one action point for a Target Lock, and a second point for a reload.

"All power to forward shields, then. Yes, forward shields. They won't try the same trick--" The rest of his sentence was cut off by the explosion of the enemy projectile. "Uhura?" "I've got something, sir...but it's very faint. I'm not sure it isn't some kind of static or feedback." "I'm sure," said Kirk. "Uhura, transfer data to the weapons console. Sulu, lock photon torpedoes on that frequency and fire." "Torpedoes away, sir," Then, at the lower periphery of the screen, came a burst of energy, followed by a stream of debris. "There! Lock phasers and fire!" "The ship appears to be gone, Captain," said Spock, peering into his scanner. "Did we hit her again?"
1 comment:

I know, blogging about Star Trek boardgames. Anyway, let's say you have Star Trek Fleet Captains with 24 HeroClix spaceships, but the ships for Star Trek Attack Wing cost $25 each at the store. You do get cards and cardboard tokens with the Attack Wing ships, but it might be possible to make your own for a dollar with the help of Staples..
For each ship you need at least:

The first 4 you can copy and paste from the Internets. Yes, there is Trek stuff on the net, who knew? The STAW wiki is a good resource.

Corsec engineering and Litko make generic dials. You can make them yourself with a paper fastener, colored pens and some cardboard.

Corsec also make conversion stands to make the circular Heroclix bases rectangular. You can play Attack Wing with circular bases if you aren't fussy. You could make a homemade version of the Corsec design.

There are other cards to print with each Attack Wing vessel, crew members and various upgrades, but they aren't essential. The Utopia Set Viewer has almost all the cards and Ship tokens (rotate |Ship tokens -15 degrees in Paint.net). Google "STAW Ship Bases" to get all the bases. There is the little picture of the Captain on the stand, you might end up taping it on.

You can switch a ship across for about half an hours work, if you enjoy that kind of thing. 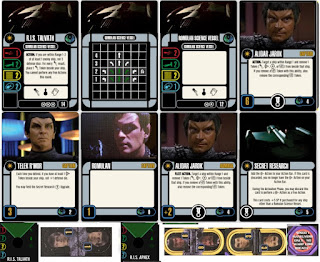 I prefer the cards actual size now, easier to read
.