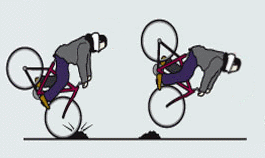 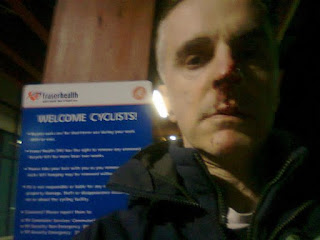 If you hit the ground face-first on your bike, you are likely to break your nose and your teeth. Most helmets are of no help in this respect, although the airbag looks pretty good: 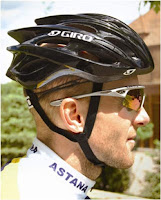 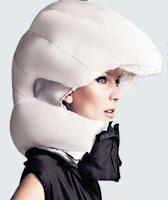 My Sportek helmet has a little visor, loosely attached by Velcro, which would provide a bit of protection: 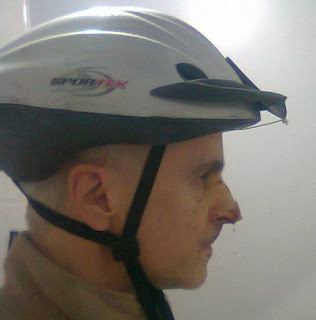 Here I added a zip tie to hold it in place. When I whacked my nose I heard a noise which was probably the visor detaching from the Velcro. The zip tie holds the visor firmly in place and provides a facial crumple zone. Of course this will probably kill you in a accident, so don't do this. 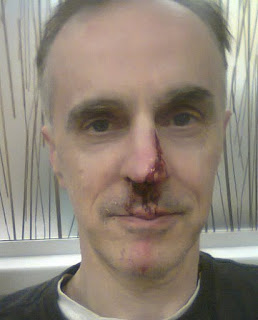 The US $44.99 EBay Kronos shock springs arrived today. My 1997 Rock Shox Judy XC shock absorbers had an elastomer (rubber) element that has disintegrated over the years. It was hard to clean out the corrosion and elastomer mush, but the Kronos springs are a drop-in replacement.

On the Internets, this seemed a difficult task, but it was just a matter of cleaning, lubing, and putting in a new spring. Actually there is just the longer spring in there, it is a 160lb spring and I am a dainty 140lb. The short spring has an adjustment feature to add extra spring force, but I don't think I need it.
I used Lucas Synthetic fork oil 5wt and Ultra Slick Synthetic teflon grease.

The other thing you have to do is open up the oil dampener black plastic tube in the right fork, and fill it with the 5wt oil. The part with the blue stripe has hole in it for the oil to flow through when you hit a bump, dampening the oscillation. It looks like there should be a piston, but there isn't. The patent has a piston. I wonder if it does anything, or is it just for show. The parts on the left fork do nothing, as far as I know.

So that was easier than expected.

Update:
A cheaper option is to buy a Polyurethane rod on aliExpress for $20, and cut it in half. I don't know if it is the same kind of polyurethane used in the original elastomers, but it might be OK for commuting thru potholes. A fork in the road I didn't take.

Yogi Berra: 'When you come to the fork in the road, take it!'

I don't have a 3D printer, but they say Duct Tape and Cardboard Might Be a Better Option than a 3D Printer. 3D printers are copy and paste, real men use scissors, tape and wiley ingenuity.

Here is my cardboard and duct tape bicycle chain guard: 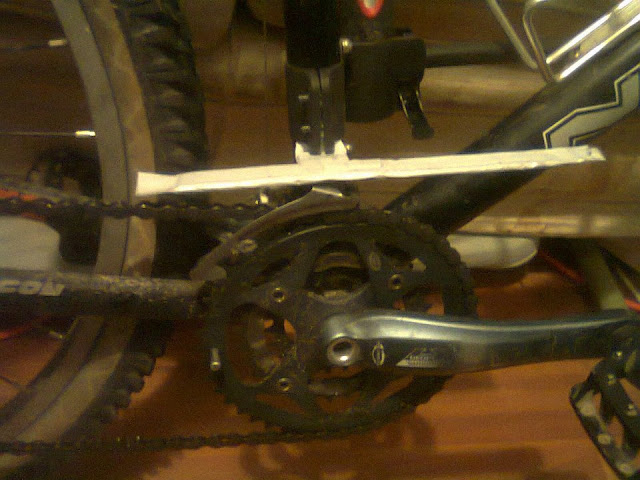 It is under-engineered, or 'minimalist'. But I quote:

"Contrary to popular belief, minimalism is about finding balance in your life not adhering to someone's else's set standard of how many items you should own or how you should organize and design your environment. It's a mindset that should allow you to pursue pleasure in life — within reason."

I submit that although isn't all about Asceticism, it is partly about duct tape. Here is the next build iteration, with extra stability and Black Ops stealth tape: 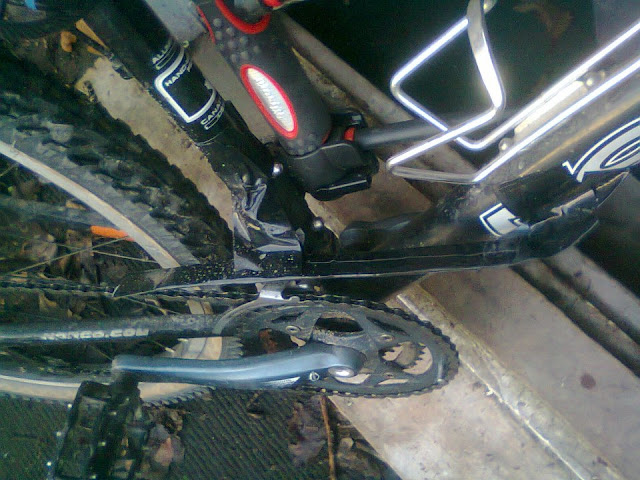 A stealth chain guard to go with my stealth kettle ("We searched for this product high and low," of course you did). It survived the trip to NoFrills, so testing is complete.

A Sharpie pen stuck in the handlebars with a blind spot mirror attached with Scotch tape: 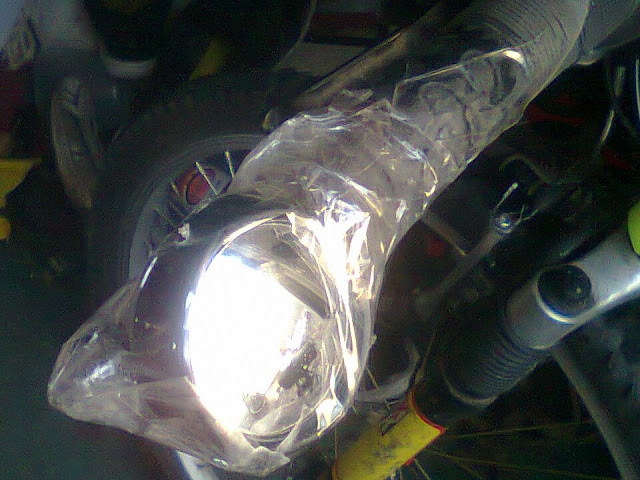 It works, but the cars are a bit small. I will write "Objects in mirror are closer than they appear" on the glass as soon as I find my Sharpie.

According to McGill University in Montreal, aboot half of all active Canadian cyclists have their bikes stolen. "My bike is too cheap to be worth stealing", you might say, wrongly:

Of all stolen bicycles, only 2.4% had been recovered. Not one of the 22 stolen bicycles that were reported stolen, registered, and photographed had been recovered at the time of the survey. So don't hold your breath waiting for the Mounties to find your bike. Rob Brunt in Vancouver claims to have better results with 529 Garage, so it is worth a try.

Chain and cable locks users are over 10 times as likely to be theft victims as U-lock users:
So that would support the "stolen bikes have bad locks" hypothesis. Since chain locks fare worse than cable locks, they must involve cheap chains with cheap padlocks. Or the survey is wrong, possibly due to a small sample size. If locks are a major factor, that would be good news, since all you have to do is buy a better lock.

There are 2 kinds of lock: boltcutter-proof and not boltcutter-proof. "Sold Secure Gold" or Platinum locks are rated as boltcutter proof, requiring an angle grinder to remove. Then we have the cheaper locks that can be cut with bolt cutters or cable cutters.
I happen to use the ($32 on Amazon.ca) Sold Secure Gold Master Lock 8195D U-Lock featured in the video, so that is reassuring. But they seem to have stopped making that, so a good choice might be OnGuard Pitbull STD Sold Secure Platinum, at $69.79 on Amazon.
No comments:

The headset on a bicycle holds the handlebars on and is usually held on by a hex key, so anyone can remove it and steal your handlebars. Some people suggest that you superglue in a ball bearing or BB pellet to make it impossible for a thief to remove: 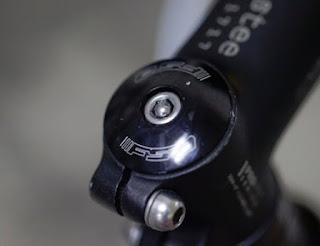 This works so well that even you will have a hard time removing it, should you need to. Leaving you in a sticky situation, I'll wager.

An even more extreme solution is to fill the nut with JB Weld steel epoxy. This way it will be almost impossible for you to remove it when you want to, but super secure:
But... in the picture above 90% of the space is filled with aluminium foil, and only the top 10% filled with JB Weld. So you can get the small amount of epoxy out, and the foil comes out with a toothpick. But it looks like a permanent seal, and will resist casual poking with a screwdriver. This works on the seat nuts too, make sure they are super tight before you do this. Security through a cunning facade.
To remove, I would drill a 5mm hole in the center of the epoxy, and flake off the remainder with a screwdriver.

I engraved my driving licence number on the frame too, with a Dremel mototool. It is very obvious.
No comments: