Caline "High Chief" may now be the Brothers Blues King of Tone.

Update at the bottom. TLDR, the gain is broken on 1 half, but I have a fix.

The Caline "High Chief" is considered a King of Tone Clone, but YouTube videos show that they don't sound the same, and the internal diode selector switches don't work on the "Clear" channel. But, the latest model has "Clear" replaced by "Drive".

Now, the Marshall Blues Breaker II pedal has a "Boost/Blues" mode switch, which bypasses the diode clipper stage for a clean boost. My guess is the the old High Chief has one channel on "Boost" mode where the diodes are bypassed, and the new model has both channels in "Blues" mode.

So, you could add a DPDT switch to either model so you have a "Boost/Blues" on one side, like the Marshall Blues Breaker II for extra versatility. Since both diodes switches off would be close to the "Clear" setting, the new version should be more flexible. The Caline pedal is 43 USD shipped with a one month wait from China, so it cost about the same as a Blues Crab, which is a single Blues Breaker. I ordered one today, so my guess is that all the diode switches will work.

The gain controlling resistors are over 5 times greater in the online traced KOT schematic, but some of the color codes are painted over on the KOT: 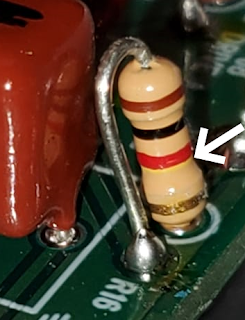 My guess would be that the 33k/27k resistors are really 3.3k/2.7k, slightly more gain to compensate for the 10k in series with the 100k drive resistor. It will be interesting to see if the High Chief has 3.3k/2.7k. 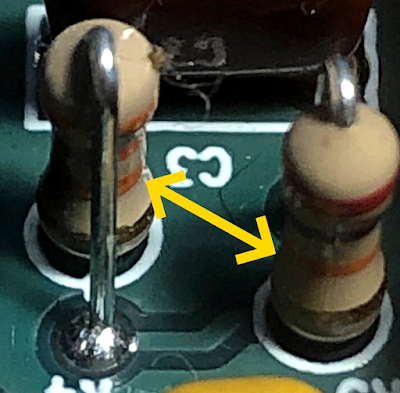 Note to self, the KOT feedback loop cap on yellow stage 1 is measured on one unit as 750pF, which would cut more treble.

Still no High Chief, but I did get a more literal translation in the mail today. The MA856 is replaced by the 1N4148, although the King of Tone sometimes uses 1N4148. 1N4148 has almost exactly the same Forward Voltage as the MA85, so that is a reasonable substitute. Schottky BAT-46 in series with BAT-54 has the same forward voltage as 1S1588 by my calculations. "We did run out of the 1S1588 years ago but got some more, if you want them just add a note when you order." according to Analog Mike.

The 33k/27k seems to be actually 33k/27k on the Cheapo KOT, are they copying the schematic or measured values, I don't know. 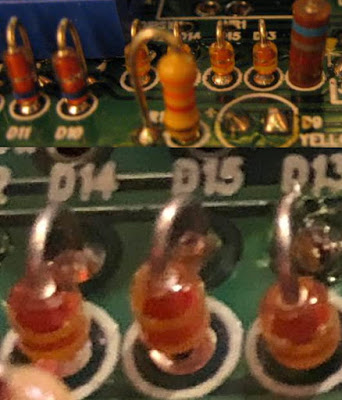 KOT, some have one yellow stripe, some have two, so there is no definitive configuration, a King of Clone is as accurate as anything else. I should get out more.

Update 2: It arrived, it is the old "Clear" version. 1 Bluesbreaker with less bass than the KOT, and a trebely "Clear" control to add injury to insult. Oddly, it has the original blue and yellow diodes the the original KOTs had, although they seem to be unmarked replacements.


The Clear circuit is mostly a Bluesbreaker, but the Clear pot connects the input of the first opamp to the output of the second. The gain is so low that the diodes never clip. I can find out which resistor boosts gain and make the Clean a super distortion channel. Probably.

UPDATE: Solder a 15k resistor across R6 to make the Clear channel higher gain than the Drive. The diodes will now make a difference. You could use a 50k preset for fine tuning.

There is a lack of bass, solder a 10nF cap across both C4 to fix that for the ex-Clear channel. I just left the Drive channel as is, a Blues Breaker. It doesn't have the KOT treble boost trimmers, but it is trebely enough.

Comment: The pedal with the R6 mod is pretty good for the money. I'm keeping the Clear on distortion setting and the Drive on Overdrive. My King of Clone is on Boost and Overdrive. The Chief has slightly less midrange the the King, both are very good though.

Comment: I think R6 on the Caline is simply a mistake on the Clear channel, the 10k replaced by a 100k. This could be yellow painted over red on the KOT, so a transcription error. On the schematic above it is the (10k)5k resistor.